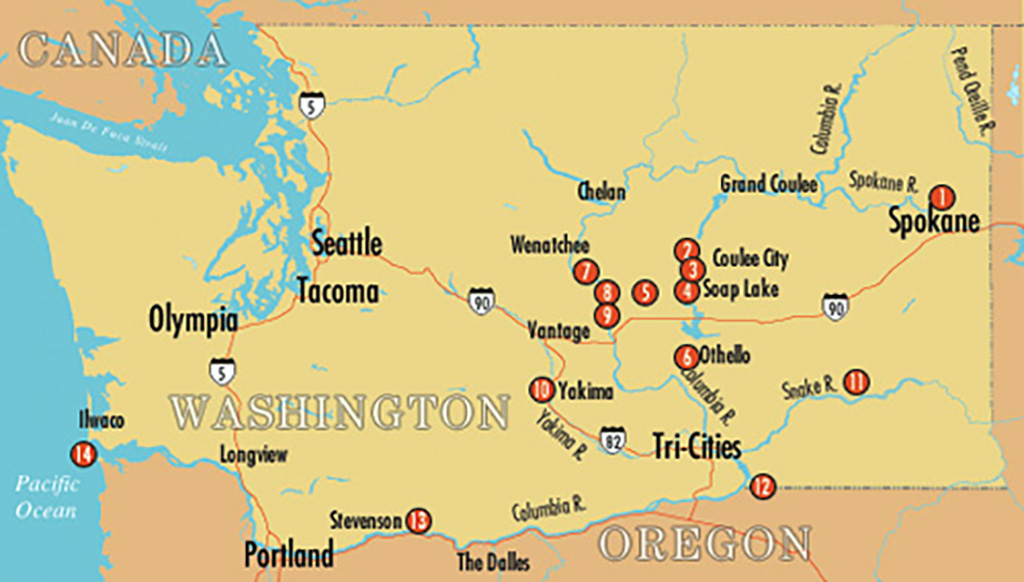 This tour explores the impact of the Ice Age floods on Washington state. It was written and curated by Cassandra Tate, and made possible by a grant from the Peach Foundation. Glenn Drosendahl provided the principal photography; geologist Bruce Bjornstad, author of On the Trail of the Ice Age Floods, served as guide and technical advisor.

The sound of the great Ice Age floods would have been terrifying: some 530 cubic miles of water bursting through a wall of ice more than 2,000 feet high; roaring over Eastern Washington at speeds of up to 80 miles an hour; drilling deep crevices into ancient basalt, stripping away topsoil in some areas, piling it up in others, flinging boulders around like ping pong balls. The pressure on the earth’s crust probably triggered earthquakes and landslides. The floodwaters pounded down the Columbia Gorge and into the Pacific with enough force to dig channels into the ocean floor. Then a new ice dam formed, impounded more water, and eventually collapsed, unleashing new floods, in a process that was repeated again and again until finally, about 13,000 years ago, the most monumental cycle of hydraulic engineering on earth came to an end.

The very size of the floods made it difficult to recognize their impact. Iconoclastic geologist J Harlen Bretz (a former Seattle high school science teacher) first proposed in 1923 that the arid “scablands” of Eastern Washington had been carved out by a rapid, massive flood -- not, as most of his contemporaries believed, by the ordinary processes of erosion by wind and water, over millions of years.

His ideas were ridiculed for decades. Aerial photographs in the 1950s vindicated Bretz to some degree by revealing the outlines of flood features that were too large to be easily identified from the ground. But it was not until the 1970s that satellite photos, taken from a vantage point 570 miles overhead, provided enough of a perspective to convince the last of the skeptics.

Even Bretz underestimated the scale and frequency of the floods. Geologists now believe that the Northwest was pummeled by a hundred or more “megafloods” during the last Ice Age alone, beginning about 20,000 years ago. There were at least a dozen earlier periods of major glaciation, stretching back for two million years, and flooding may have occurred during each of them.

The primary source of the more recent floods was Glacial Lake Missoula, a huge inland sea created when a lobe of the Cordilleran Ice Sheet crept south from Canada and blocked the drainage of the Clark Fork River in Idaho. Water backed up behind the dam into western Montana, eventually covering some 3,000 square miles of land to a depth of up to 2,000 feet.

Ice makes a flimsy dam. Studies of ice-jammed lakes in Alaska and elsewhere have shown that when the level of water behind an ice dam reaches a certain point, the ice floats, allowing water to escape from underneath, first in a trickle, then in a torrent. That’s one explanation for the failure of the dam holding back Lake Missoula. Another is that highly pressurized water at the base of the dam permeated cracks in the ice. The cracks widened into tunnels at an exponential rate, and the dam caved in on itself.

Once the dam was breached, Lake Missoula was uncorked as explosively as a bottle of fiercely shaken champagne. An estimated two trillion tons of muddy, ice-laden water -- a volume equal to 10 times the combined flow of all the rivers in the world today -- tore through the remnants of the dam and thundered over parts of four states on a 630-mile journey to the sea. The lake drained in two or three days. Almost as soon as it was emptied, ice blocked its outlet again and the lake began refilling, in a cycle believed to have been repeated every few dozen years or so.

The Ice Age floods rearranged the dirt, rocks, streambeds, and contours of 16,000 square miles of the Pacific Northwest. They pared land down to bedrock in places, built it up in others; rerouted rivers; scoured out coulees and potholes; and steepened and widened the Columbia Gorge. Enormous boulders, encased in ice, bobbed along on the floodwaters, ending up on hills and in flatlands hundreds of miles from their origins, a puzzle for the farmers who would someday plow around them.

Temporary lakes formed behind natural constrictions along the course of the Lower Columbia River at Wallula Gap, Rowena Gap, and Kalama. Flood-borne sediments settled out of those lakes, becoming part of the rich topsoil that supports the farms and orchards of Yakima, Walla Walla, and the Willamette Valley today.

The sediment is also the basis for the quality of wines produced in the Mid-Columbia Basin. Wine grapes require soil that is both fast-draining and water-retentive, characteristics provided by the fine-grained sand and silt in the flood deposits. Wheat grows tall in the areas of the Palouse that the floods skipped over, leaving intact the deep layers of windblown silt and soil that once covered most of the Plateau.

Thousands of years after the last drop drained away, the geologic legacy of the floods continues to define the Northwest, from the way the land looks to the uses humans have found for it.