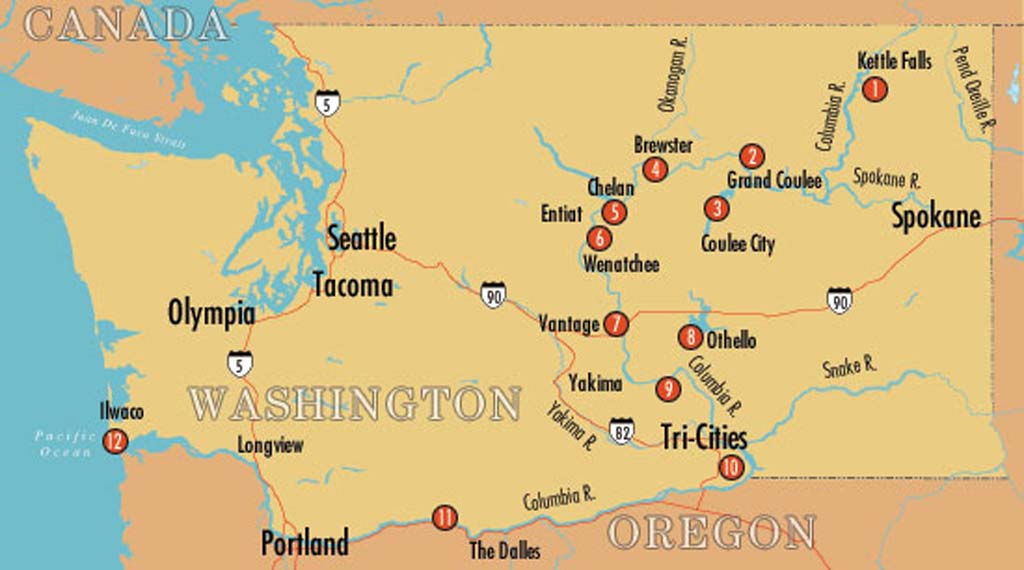 This tour of the Columbia River focuses on state and national parks and wildlife areas. It was written and curated by Cassandra Tate and photographed (except for historical pictures) by Glenn Drosendahl. It was made possible by a grant from the Peach Foundation and an appropriation by the Washington State Legislature.

The Columbia is as much a river of the imagination as it is of hydraulics. It existed as an idea -- among people living far from its actual shores -- long before cartographers began drawing its actual contours on maps. Seventeenth-century European geographers envisioned it as the "River of the West," a longed-for shortcut to the riches of the East. Eighteenth-century explorers searched for the headwaters of the "Ouragon" in the mythical Straits of Anian, said to be a "Northwest Passage" to the sea. Nineteenth-century entrepreneurs knew there was no Northwest Passage, but they dreamed of other wealth that could be harvested from the river. Twentieth-century engineers looked at the river and saw unlimited kilowatts, millions of acres of irrigated desert, and a watery highway that would turn landlocked cities into seaports.

The great river has carried many different names. To the Chinookan people who lived along its lower banks it was "Wimahl," meaning simply "the big river." The Sahaptin speakers on the upper river called it “nc' i-wána." The Spanish explorer who was the first non-Indian to actually see the river, in 1775, named it the "San Roque." Seventeen years later, an American merchant seaman gave it the name it bears today, after his ship, the Columbia Rediviva.

Originating as melting snow in the mountains of British Columbia, the Columbia gathers water and energy from dozens of tributaries in its 1,214-mile journey to the sea. The second largest river in North America, it touches the lives of nearly everyone living in the Pacific Northwest. It is a corridor for commerce and transportation; a source of food, electricity, and water for irrigation; a conduit for industrial, agricultural, and municipal wastes; the unifying force that knits the Northwest into a tapestry of mountains, deserts, river valleys, grasslands, gorges, and forests.

The Columbia is also the most engineered river in the world. There are more than 400 power and irrigation dams on the river and its tributaries, including 11 on the main stem in Washington state alone. From Bonneville Dam, near the mouth of the river, to Donald Station, in Canada, the Columbia is essentially a series of calm lakes behind concrete barricades, named after dead leaders or buried landmarks.

The environmental costs have been huge. Natural runs of salmon and steelhead have all but disappeared, replaced by welfare fish, raised in hatcheries and barged around dams. Releases of radioactivity from the Hanford Nuclear Reservation, seepage of pesticides from farm fields, erosion caused by logging, discharges of heavy metals from smelters and other industries: All these have ecologically burdened the Columbia.

And yet natural wonders can still be found along the river. According to one estimate, irrigation runoff has increased the overall acreage of wetlands in the Columbia Basin by a factor of 20, creating enticing stopovers for migrating birds and waterfowl in areas they used to bypass entirely. Cold War secrecy helped preserve the Hanford Reach, the only remaining free-flowing, nontidal stretch of the river, now part of the 195,000-acre Hanford Reach National Monument. Twenty-two Washington state parks are located on or near the main stem of the Columbia, in addition to 16 national wildlife refuges, scenic areas, and recreation areas.

After more than a century of dredging, channeling, pumping, and damming, the Columbia remains "an organic machine" (in the words of historian Richard White), serving a thousand masters yet retaining a life of its own.

Click on the numbers on the map above to read more about the Columbia River.